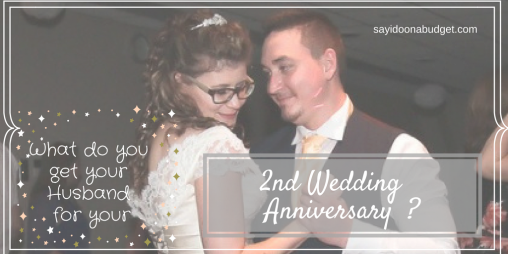 Today is exactly 8 weeks until my 2nd wedding anniversary. You may remember when I posted last year about us choosing to try and follow the traditional wedding anniversary gifts. Last year was paper. That was quite easy… easier than this year anyway!

This year, the gift should be cotton.

So, what makes a good cotton anniversary gift? Some ideas I’ve considered are:

That’s as far as I’ve got. If you have a good suggestions please let me know as it is getting closer and I’m just not sure!

nice to plan something special, or do something nice for my Husband. He doesn’t have the day off work. I know I could cook a nice dinner, decorate the house with some candles and the such. But we may still be living with my sister at the time, so some ideas I would normally do, such as putting candles round the house, cooking dinner, running and bath and then retiring to the bedroom is very unlikely to happen.

And that leaves me a total loss as to what I could do. I know I’ve already asked for ideas, but if you’ve got any ideas for what I can I could plan to make our anniversary evening nice I’d be really pleased to have them.

Doing this post about my 2nd anniversary coming up soon reminds me, that I didn’t ever share with you what the Husband and I got each other for our 1st anniversary. The last post I published about my first anniversary was two weeks beforehand, when I had bought his gift but didn’t want to share what it was on the blog in case he saw.

Last year our anniversary was on a Sunday, but we didn’t do all that much. We swapped gifts in the morning then popped into town to have a walk around with a posh ice-cream. I had decided to buy Steven a photo album of photos from our whole relationship together. In our relationship to date we only have TWO photo albums, our wedding album and the album I made for him last year. My gift from him was a framed print with some of the music lines and lyrics from our first dance song which you can see on the wall behind us.

Even if I do say so myself, I think we did quite well with the gifts we got each other last year, and I’m hoping to be able to get him something really good this year too. But WHHATTT?

3 thoughts on “2nd Wedding Anniversary – Looking for opinion and ideas”